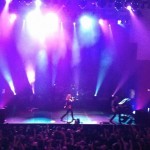 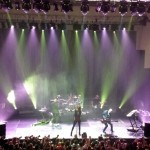 Garbage is one of my childhood rock bands. They retired since 2005. After 7 years, they returned to the stage and released their new album – Not Your Kind of People. I really like their new album and I think they changed a little bit but still sound like the Garbage we know. Great music. The concert was fabulous. Shirley was such a good performance and she sang many old school songs and the atmosphere was fantastic as well.

Great concert and wish them continually create new music! You could watch one of her songs we recorded here.