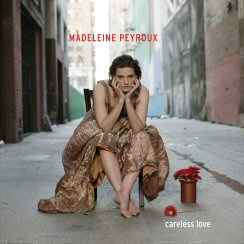 Madeleine Peyroux a 22-year-old American who had been living in Paris as a street musician, suddenly found herself on the fast track to fame. Appearances at Lilith Fair and jazz festivals, and opening tours for Sarah McLachlan and Cesaria Evora followed, while Dreamland’s sales reached an impressive 200,000 copies worldwide. “It was great,” recalls Peyroux. “I got to perform with fantastic musicians. I got to see Nina Simone live. I could’ve kept running with it, but instead I stepped back and took a breather.”

Many people have compared her sound to Billie Holiday and we tend to agree.Among the songs she covers are Leonard Cohen’s “Dance Me to the End of Love,” Bob Dylan’s “You’re Gonna Make Me Lonesome When You Go,” Elliott Smith’s “Between the Bars” and Hank Williams’ “Weary Blues from Waitin’,” each a twist on the original — Cohen more haunting, Dylan more joyful — accentuated by an able band and Larry Klein’s delicate production. Her time away hasn’t hurt sales; the album is lodged in the top five on Billboard’s jazz chart.

Well I heard Peyroux voice it’s from the soundtrack of the movie ” Autumn in New York”—Theme song ” Getting Some Fun Out of Life”. Her voice isn’t sound like a 22-pear-old girl; it’s pretty deep and special voice but fix jazz vocals. The ” Weary Blues” and ” Dance me to the End of Love” first came to my ears and I feel like I am in love again and make me want to sway immediately. Good music need to be appreciate and no need to talk too much. Let’s bring a glass of wine or bubbling champagne, play her music, and enjoy the moment.