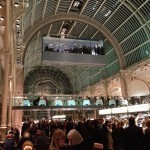 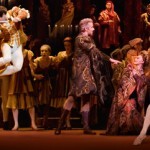 I bought the tickets few months ago and Eileen said to join us. We met in Royal Opera House at seven and show started at seven thirty. The lobby was full of people having champagnes and drinks. The design of the lobby is just breath-taking with magnificent architecture and fancy modern twist.

It was a three and half an hour show. The dramatic music and high standard performance were super! It reflected the class story about Romeo and Juliet’s of their love affection, conflicts between both families’ hatred and finally tragedy in the end. It was so well-permanence and acting! Royal Ballet never let me down and they continually produce great shows after another.

Eileen and I really enjoyed the show. Bravo!

Picture one was from Royal Opera House, second one was taken by me.