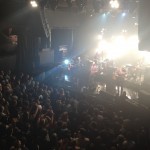 We have been listening The Temper Trap‘s first album for long time. They had released a new album and touring in the UK.  It was so great to see them perform in Koko. Lead singer Dougy Mandag has such a fantastic voice.

Great concert of The Temper Trap in Koko.