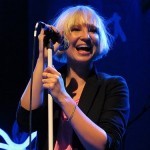 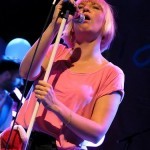 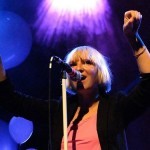 I discovered Sia Furler while we watched last episode of the TV series “Six Feet Under” a year ago. The song “Breath Me” is unforgettable and wonderful ending for the TV series. Thereafter, I have been listening Sia’s since then. Sia was one of the vocals in Zero 7 previously and went solo in 2005.

In Shepherds Bush Empire night on 9 Oct, the concert set decorated with toys and fluorescent, I guess it matches her third album’s image – funky and cartoonish. At the beginning, surprisingly, Sia and her band members all dressed up in a halloween skeleton outfit approaching the stage. Sia sang the most from the album “Some People Have Real Problems”, including Destiny and The Pageant of the Bizarre wrote for Zero 7. Sia used her popular hit ” Breath Me” end the show. The fans were so enthusiast with big applauses and on-call, and Sia moved into tears in the end.

Sia has a gorgeous, dusky voice, sometimes it reminds me as a Jazz vocalist. I enjoyed the concert and so pleased to see her performance.

I recommend her best album “Some People Have Real Problems”to you, especial “Breath Me”, “Sunday”, “The Pageant of the Bizarre” and “Soon We’ll be Found” – they are my favorites.

Here is her amazing music video of this song in Youtube: Sia-Soon We will be Found

Go to see more pictures of the concert in Flickr by Preamble . The cover picture was taken by him too.