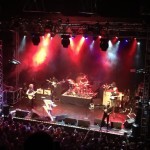 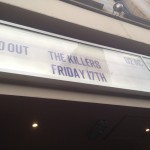 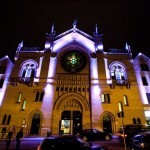 John with his magic fingers got us four tickets in Leeds O2 Academy to see The Killers. We always love to see The Killers. However, with their popularity, it is very hard to see them in a small venue. The Leeds O2 academy one night performance is supposed to rewards the fans. The tickets sold out after releasing 2 minutes in O2 academy website – I tried to get them, but failed.

We got family in Leeds and it is also a chance to see family – kill two birds in one stone. Although we lived in Leeds for a year before, I had never been to O2 academy. It was not far from city centre and easy to reach.

We went in and it was so impressive. It is new, modern and stylish. I had never been to a concert hall is so new and clean except The Royal Albert Hall and Royal Opera House in London.

The fans were so crazy and excited. They all could sing every songs of The Killers. Mr Flowers’ voice was incredible amazing – strong, powerful and clear. Additionally I could see Brendan and the band so clear (we were in second floor, because I am too short for first floor.) They sang few new songs and the crowds were jumping and dancing with the band. It was so great and felt so lucky to see them in such a small venue.

Love The killers and look forwards to listening the new albums.